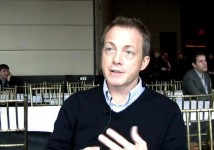 Demand Media, the fast growing creator of  instructional online text and video content, has a huge backlog of assignments:  some 150,000 assignments waiting for a network of 7,000 freelance writers, editors and videographers to undertake, according to Steven Kydd, Executive VP of  Demand Studios.

I interviewed Kydd last week at the AlwaysOn OnMedia conference here in Manhattan.

In a story in Monday's New York Times, David Carr says that Demand pays as little as $30 for an original video clip. While this is quite a modest sum, freelancers are paid twice-weekly and some qualify for health insurance, Kydd told me.