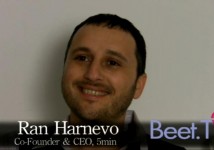 5Min, a small start-up with offices in New York and Israel, backed by Spark Capital, has landed the number 10 spot as most viewed video video property as measured by uniques, according to numbers released by comScore yesterday.

comScore reported that 5Min had over 30 million uniques in December, just behind the Turner network.

Although 5Min has been called a how-to site and is often compared to Howcast and Videojug, 5Min does not create original videos, but is primarily a syndication engine that matches niche content with appropriate sites.  In some instances these are small video publishers seeking an audience or big ones like Scripps who want to efficiently distribute how-to food and gardening clips widely on the Web.

Earlier this week, I sat down with 5Min CEO Ran Harnevo for this chat about his business and the opportunity for big and small content creators to reach a big audience through his company's platform.