Sergey Brin is the Force Behind Google’s Showdown with China, Ken Auletta 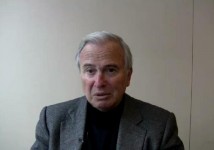 Google co-founder Sergey Brin, the son of persecuted Russian Jews, has been the driving force in the the company's showdown with China, says Ken Auletta, New Yorker media columnist and author of the best selling book "Googled: The End of the World as We Know It."

I spoke with Auletta earlier today at the offices of The New Yorker.  He recalls the 2008 shareholder meeting where a motion was presented to demand an end of doing business in China over censorship.  Brin abstained from the vote, while Larry Page and Eric Schmidt voted it down.

Jessica Vascellaro writes in the Wall Street Journal about the internal debate about the very pubic confrontation with the Chinese.  She reports that it was Brin who has pushed for getting out of China.

Editor's Note:  Our apologies for the audio hum in the background of this video. Not up to our usual standards.