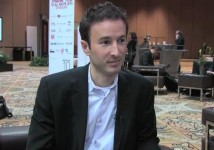 LAS VEGAS, FreeWheel, the video advertising platform, is off to a strong start, with new customers in Turner and and VEVO, the company announced earlier this week at the NAPTE convention.

Our Daisy Whitney covered the show and interviewed Brent Horowitz, head of business development at the company.

Here's an in-depth story on the FreeWheel deal with Turner by Michael Learmonth at Advertising Age.

Earlier this year, YouTube announced it was using FreeWheel to serve ads.