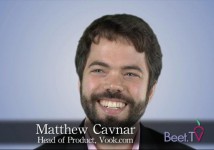 Digital media and metadata company Digitalsmiths paired up with Microsoft to demonstrate a technology partnership between the two companies, Digitalsmiths CEO Ben Weinberger told me at the Consumer Electronics Show in Las Vegas.

At the show, Microsoft demonstrated how Digitalsmiths can help add more interactivity to Silverlight so viewers could click on a character, actor, or object and link back to more information on places like Bing, Weinberger said. Expect more details on the technology
demonstration soon, he added. Digitalsmiths works with television and
movie studios to manage the metadata and rights relating to their assets, so they can wring more revenue from their existing and library content. Customers include Warner Bros., TMZ, Paramount, and others.

Weinberger also shared some details on where Digitaltsmiths is headed next — the news and sports business. Digitalsmiths will announce new deals shortly in this area, marking the first time the company will apply its tools to a live viewing environment. Now it can be applied "to things like news and sports that are more current, live, temporal than what an episodic or feature film might be. We've actually recently signed a deal that we're getting ready to announce with another studio, so stay tuned," he told Beet.TV.

The company inked a deal late last year with Paramount to create a clip portal for its licensees to use when they need content from Paramount movies. Regarding content delivery, "now it's what you want, how you want it, delivered the way you want it," he said.

By Daisy Whitney on January 17, 2010 @daisywhitney
Tweets by Beet_TV