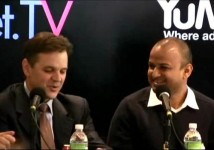 MSNBC.com today introduced a new embeddable player in a move to increase consumption of news video to other locations, notably on Facebook.

The new player comes in three different sizes, making it usable on a variety of Web pages and social networks.

Consumers can embed video clips right into their Facebook timelines, e-mail them or post them to Twitter right from the embedded player.  Consumers also have the ability to edit the video to select only the portion of the clip they’d like to view, the company says.

More details and strategy around the new player will be addressed later today at the Beet.TV Online Video Roundtable by Stokes Young, Multimedia Editor for MSNBC.com.  Tune in from 4-6 ET.

In October, I spoke with MSNBC.com president and publisher Charlie Tillinghast. He spoke about plans for the new player. I have republished that interview today.

Good timing for launch of the new player with The Today Show’s exclusive interview this morning with Michaele and Tareq Salahi, the alleged White House party crashers. The video went online within 30 minutes of the broadcast.

We have posted the player below.  Suggestion, go to options and hit full screen.

Visit msnbc.com for breaking news, world news, and news about the economy