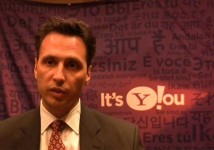 Yahoo! has a checkered history with original entertainment content. The Web giant famously tried and failed to make a splash in Hollywood when it hired television programmer Lloyd Braun.

Now, the Sunnyvale, California Internet giant is trying again, and this time Yahoo! appears to have a more methodical and circumspect approach to Web-centric programming.

Beet.TV caught up with Yahoo's  VP of Media Jimmy Pitaro in New York during Advertising Week.

He told us the company is looking to invest in short-form, original content that meets a specific audience need.  Presently, 10% of Yahoo's video programming is original and that will increase, he says.

Translation: Yahoo has abandoned the quest for the big, broad hit and is instead focused on reaching particular audiences within news, TV, finance, and other areas. The company will also license existing content, develop new material and hire bloggers and writers, Pitaro said.

"There are two components to original content," he said. "There is text and video and we plan to invest in both. We plan on hiring writers, bloggers, editors on the text side and producing more original programming that responds to the audience needs."

Yahoo! has done a good job building up a stable of steady performers in video. That includes "TechTicker" on Yahoo! Finance, which launched in February 2008. The show is sponsored by Scottrade and averages 350,000 streams per week, a spokesperson told Beet.TV.

There's also the popular primetime recap show "Primetime in No Time" that premiered in March 2008. Verizon is the advertiser and Yahoo said the show has earned 280 million streams to date with peak days bringing more than 7 million users.

Several other Yahoo originals are sponsored too, including "The 411 on omg!" sponsored by Starburst, "This Week in Music," launched last week and sponsored by Target, and "Yahoo! Sports Minute," sponsored by Dunkin' Donuts. That show averages 115,000 streams per day, we have been told.

Those are the kind of shows Pitaro said he will look to build because they reach specific audiences. The process of picking shows involves early outreach to advertisers on how to partner, collaborate, and create a differentiated show. "Our number one priority is growing engagement," Pitaro said.

By Daisy Whitney on October 6, 2009 @daisywhitney