Sir Tim Berners-Lee Looks Back: the “//” in Web Addresses Was Unnecessary 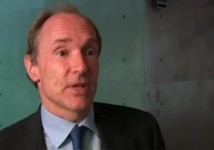 WASHINGTON, D.C. — Asked what he would have done differently in creating the Web, Sir Tim Berners-Lee, says in this video that the double slash, the “//” after the colon in Web addresses, was unnecessary.

Berners-Lee, the inventor of the World Wide Web, was interviewed on stage by New York Times technology reporter Steve Lohr at a technology symposium at the Embassy of Finland in Washington on Thursday.

He makes his comments about the “//” issue at 3:30 in the clip. (He has spoken about the unneeded symbols previously.)

In the interview, Berners-Lee speaks about the importance for governments to place great amounts of data on the Web and the emergence of the semantic Web. He cites successful examples in Britain.

This 37-minute video was part of a two hour symposium organized by
Finland’s Technology Academy Foundation, a public and private
foundation.

Started in 2004, the foundation awards a biennial
prize in the amount of $1.4 million, entitled the Millennium Technology Prize, to individuals for
technology achievement that betters humanity. Berners-Lee was the first winner.

The other two winners are Professor
Shugi Nakamura of UC Santa Barbara (2006) and Professor Robert Langer of MIT (2008). All three winners participated in the symposium.

You can watch the entire session on Livestream.

Here is the transcript of the Berner-Lee interview with PBS done on Thursday.

Update: 10.14: Here is my interview with Berners-Lee on the topic of video and the Web.