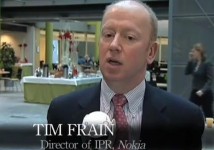 ESPOO, FINLAND – Earlier today Nokia filed suit in a U.S. federal court alleging patent infringement by Apple and iPhone.  The Wall Street Journal reports the matter has to do with wireless standards.

Back in 2007 in Espoo, the high tech suburb of Helsinki where Nokia is based, our European correspondent Mika Hentunen interviewed Tim Frain, head of intellectual property at Nokia, about efforts the giant handset maker is taking to protect its technology.

At 2:50, Fraim explains the core issues today with IP and mobile devices has to do with the interoperablity of wireless standards.  This appears to be core the action against Apple.

Here's the take by colleague Owen Thomas at NBCBayArea.