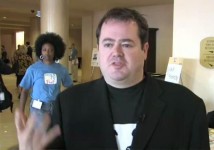 HOLLYWOOD, Calif — After inking a deal with portal DailyMotion to fund the pilot for his latest online series, Web star Hayden Black tells Beet.TV the site is now pitching potential sponsors for the show.

The pilot for the sci-fi musical comedy called “The Cabonauts” has been shot, so DailyMotion is making the rounds with advertisers, Black told Beet.TV at the NATPE LA TV Fest in early July. He’s aiming for a brand integration deal for “fun, organic” product placement. “I have never thought traditional ad models are the way to go. This isn’t TV so why a TV model would be apppropriate for the Internet is beyond me,” he said. “Post-rolls and pre-rolls aren’t really cutting it because they don’t go to every single platform.”

The series, which takes place in an intergalactic space taxi, stars Black and “Star Trek’s” Nichelle Nichols. The exclusive deal with DailyMotion calls for the aggreagator to release the show exclusively on its site for the first month of each new episode, according to TubeFilter. The show is said to have a budget exceeding that of last year’s breakout Web hit “Dr. Horrible’s Sing Along Blog.” DailyMotion draws about 55 million unique worldwide visitors each month.

Black premiered the trailer for “The Cabonauts” at Comic-Con.

Black emerged with the first crop of breakout Web stars three years ago with his popular and well-reviewed “Goodnight Burbank.” That enabled him to land a production deal earlier this year with Babelgum for a sequel.

It’s rare that a site will fund a show in advance.

By Daisy Whitney on July 31, 2009 @daisywhitney
Tweets by Beet_TV