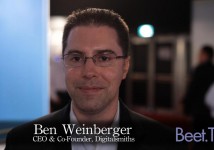 HOLLYWOOD, Calif — In an effort to expand its online reach with teens, Alloy’s Teen.com portal teamed up with Fox Searchlight to run a series of Webisodes to support the upcoming flick “Post Grad,” Alloy’s Jamie Elden told Beet.TV at the LA TV Fest in earlier this month.

In the last two years, Alloy Media & Marketing has been expanding into Web production and distribution adding to its traditional media roots. Alloy is the media company behind the books and the film and TV adaptations of “Sisterhood of the Traveling Pants” and “Gossip Girl.”

The new Web efforts include the partnership with Fox Searchlight for the the August 21 film premiere (a book was adapted from the “Post Grad” screenplay and released this summer) and other original Web shows. That includes the recent series “Haute & Bothered,” sponsored by LG Mobile. In addition to scripted series, Alloy also produces newsy and how-to videos for its Teen.com TV network on fashion, makeup and other topics.

Targeting teens is a smart strategy online that can help win sponsors and viewers. Teens are the the heaviest consumers of Internet video programming, watching 175 minutes per viewers each month, compared to 123 minutes a month for folks 18 and older, Nielsen said.

Elden said the Teen.com network generates about 40 to 50 million views each month, up from 500,000-plus just 18 months ago. Most videos on Teen.com are user-initiated, but sometimes sponsors request that videos play automatically, as is the case with the Post Grad site, Elden explained.

‘In the case of Post Graduate, we created an exclusive channel for them to promote a book we published, and an original web series we produced,” Elden said in a separate interview with Beet.TV. “They wanted the video to launch once someone clicked on our network to visit the channel. Once there they have to further click to watch each episode. For all other Teen.com TV content you have to click to play what you wish to see.”