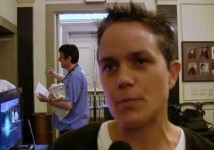 Adobe seeks to unify the many flavors of video players with one universal framework, which it calls Strobe.

The program, which has picked up a number of partners, is close to being launched, according to Adobe's Jen Taylor in this interview.

Strobe was announced by Adobe in April.

We spoke at the Open Video Conference last month.  She told Beet.TV that Adobe is "close to its first roll-out" of the new product.

Jen Taylor:  Basically what Strobe is is an open, extensible, pluggable framework for people to quickly and easily build and deploy video players as well as integrate with video services, such as advertising and analytics. Basically, the challenge we recognize is that in order to deliver video consistently to the web today, everybody was rolling their own player. Video player technology–often those are thousands and thousands of lines of application code to actually get the richness of functionality. Most people don't wanna be in the video player business, they wanna be in the ad business or the video delivery business, and so what we're doing is building an open extensible framework and we're going to provide it in two ways. The first is obviously contributing it to the open source community and putting it up on open at adobe.com. And then the other will be every once in awhile we'll be kind of pulling it from the open source and making that kind of compiled code available as components in the website, so people aren't open source heads can go ahead and get started with it.

Andy Plesser:  So the framework is available now or entirely or how's the roll out?

Jen Taylor:  We are just getting close our first roll out. We're working frantically to kind of get the code together at this point, but we're making great progress. We're building on top of a lot of the code that already exists within the ecosystem. And you may have seen many of our partner announcements. We're partnering with many of the leading content delivery networks, many of the leading content publishing solutions, advertising solutions, analytic solutions, such that they are on deck to provide plugins that work in easily with this framework.