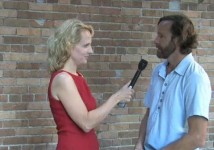 RealNetworks has just released RealPlayer SP, a downloadable application which allows users to save Web video, including YouTube clips, to several mobile devices.

RealPlayer SP also provides users the opportunity to share videos on social networks.  It can save and transcode various file formats including Flash, Quicktime, Windows Media, and RealVideo.

Jeff Chasen, VP of product development, came by the Beet.TV headquarters for a demonstration.

For certain devices, such as the Blackberry, users need a memory card to save files.

Here are some details from the company about the new software:

•    Play Web video on nearly any device, including the Blackberry family, Nokia smartphones, iPhone, iPod, iTunes, Xbox, and many others through automatic conversion and transfer to the correct device format, including Flash, Windows Media, QuickTime, and RealVideo.
•    Save time by downloading several videos or transferring the same video to many different devices from one screen.
•    Add custom device profiles and easily change format settings to maximize video quality and control for a device.
•    Create audio-only files from videos for playback on devices that only support audio.
•    Easily share videos on Twitter and Facebook.
•    Support for latest versions of Firefox, Internet Explorer, and Google Chrome.

This is an extension of RealPlayer, the program which allows users to save most Flash video to their computer.

Some videos are protected by publishers with DRM and cannot be downloaded to RealPlayer.

Jeff Chasen:  We're releasing a new version of RealPlayer; we're calling it RealPlayer SP. "SP" stands for social and portable. It's all about taking video and sharing it with your friends and putting it on your favorite device so you can watch it and consume it anywhere you want.

So here, I'm going to go to a video website and just pick a short video here. I'm going to click and watch it. Now in the upper right corner you'll see the video, the "Download This Video" button will pop up. And here I can easily click "Copy to BlackBerry Bold." What we're doing right now is we, we took the video from that website and now we're converting it to a format that plays on the BlackBerry Bold and we're gonna transfer over there for you. So really what you saw was two clicks. I clicked once to download the video and then I clicked one more time to say, "Put it on my BlackBerry Bold" and that's it.

There are some services that are becoming come, but you know downloading video to a to a cellphone or Smartphone over the air is a very slow process. There isn't much available. Not nearly as much is available on the on the web at large, so RealPlayer, in our last release we supported thousands of sites where you can download video, put it on your PC, and watch anytime you want. With this release now, we're gonna let you basically download those videos and put them on your favorite device–a BlackBerry, an iPhone, the New Palm Pr– and watch them anytime you want.

Consumers, when we'ved asked them how's it going with RealPlayers, they say, "We love downloading videos, but what we really want to do is take it with us. We want to take it with us on the train, on the plane, on the trip, show it to my friends and family, you know take a video from my camera of a soccer game of my son and put it on my phone so I can take it with me all the time." So that's what we've done with this, made it really easy for the user, really two clips. We introduced "one click downloading" in RealPlayer 11, now we're introducing basically two clicks. You click one download, another, you pick your device, say you have a BlackBerry Bold, and it goes on your device, and there it is; it's that easy. We take care of all the complexity behind the scenes.

Generally, we try to make our software widely available so RealPlayer SP is free and it supports most of these devices for free. There's a premium version where you can get a little bit better video quality if you get the premium version, you can get dvd burning and few other things that. But the free version allows you to do all these things: download videos, put them on these devices. And we make money through a number of different ways, though advertising, through offering some subscription services where can download movies called Super Pass and other products like that.