MySpace Has been a “Calamity for News Corp,” Michael Wolff 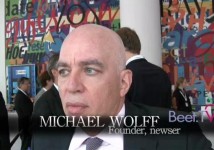 Michael Wolff, who has written a much talked about book about Rupert Murdoch and the rise of News Corp, sees MySpace in a downward spiral.

In this interview with Beet.TV, he calls the acquisition of the social media site a "relative calamity for News Corp." because the giant media company "knows nothing about technology."

I caught up with Michael yesterday at the Advertising 2.0 conference after his keynote dialogue with Andy Lack, head of multimedia for Bloomberg. On stage, he said the valuation of MySpace would be somewhere around $600 million, about the purchase price.  He didn't give this valuation in the interview.

Michael is the media columnist for Vanity Fair and is the founder of news aggregation site called Newser,  I have a second interview on his start-up which we will publish later.

Nicholas Carlson reports on problems at MySpace on the Silicon Alley Insider. TechCrunch reported earlier this week of massive layoffs coming soon.  Reuters reports today that there is no comment on layoffs.

Last month at the Wall Street Journal's D: All Things Digital conference, Jonathan Miller and Owen Van Natta, the two new senior executives in charge of MySpace, were on stage with Walt Mossberg and Kara Swisher to talk about problems at the site and where they want to take it.  I've pasted that clip below:

You can find Beet.TV up on the Huffington Post too.

Andy Plesser:  Tell us about, you know, your thoughts now looking at MySpace in the context of the News Corp. acquisition. Sort of the history of it, the value now, good, bad. What are your thoughts?

Michael Wolff:  Well I think it obviously was a good acquisition at, at one point. It was an incredible acquisition from about 600 million to…an imputed valuation of, God knows, 15 million one day, 15 billion, 20 billion. But the truth of the matter is is that they were not able to sustain…they were not able to be competitive with, with  other companies, notably Facebook in this, in this, in this business. And I think that they weren't able to be competitive because, you know, News Corporation knows nothing about technology. So I think it was, the inevitable happened. And actually we've seen this again and again and again and again is that when mainstream traditional media companies buy technology companies they don't do very well and often they do terribly and often they actually collapse. So I think that's what we're looking at in terms of MySpace. It's no longer competitive, you know, it's it has, you know, it continues to have a very large audience, but that growth has become less and less and less and less and it will ultimately be no longer growth and it will reverse and…and unfortunately, I mean, to compound the situation, it's never really had a cogent or powerful business model. So even managing its decline…managing for cash is not, it's not a reality. I mean AOL in a sense had a similar experience bought by a, became involved with a traditional media company and it went into a precipitous decline, but it made a lot of money, so year after year as it gets smaller and smaller and smaller, you know it still is making, making money. But that's not gonna be the case with MySpace so I think it's it's a relative calamity for News Corp.