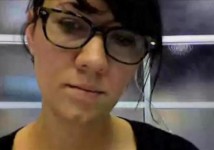 CNN's iReport popularity as a destination has surged with the Iran crisis. A CNN spokeswoman citing internal numbers told me that page views for the iReport reached 1 million on Monday.

Nielsen put the monthly unique visitors to iReport at 1.8 million.

But beyond the emergence of the CNN user-generated-site as a destination, it has become an essential part of CNN's coverage of the crisis in Iran where virtually all western journalists are banned from covering street demonstrations.

Over the past week, some 5,000 Iran-related videos and photos have been uploaded to iReport. These reports are unfiltered.  About 150 of these citizen contributions have been used on the air or on CNN.com after being vetted and verified by the network.

Yesterday I interviewed Lila King, senior producer at CNN.com, who oversees iReport.  I interviewed her in the CNN newsroom in Atlanta via a Skype Video hook-up from our New York studio.

Lila says election dispute in Iran has become and an "enormous moment in citizen journalism."  One of the most important developments is how citizen journalism is being authenticated, often by double sources, to corroborate the veracity of the submitted content before being used by the network.

For an in depth examination of how mainstream media is dealing with UGC from Iran, notably the "Neda" video, check out this post by Bill Mitchell up on Poynter.

Update:  More on the evolution of iReport by Peter Kafka at All Things D.

Lila King:  What's happening around Iran is really because CNN and, you know, every major news organization is no longer, is no longer able to, you know, have people actually there and recording everyday. We're relying on iReporters and what we're hearing from them in the fields to really give us a sense of what's actually happening and because that's, it's become such a powerful way to find out what's happening every day on the ground we've actually taken the iReport desk and integrated it with CNN's international news gathering in a way that we've never really done before. And I think that's the, probably from an internal perspective, that's that's the big shift. It's, it's not so much that iReport has…iReport hasn't really changed the way we operate, but we've become…iReport has become a really central piece of the way CNN is able to tell the story this time.

Andy Plesser:  This is an extraordinary news story and it's also extraordinary time of press censorship, as we all know. Is this…do you see this whole Iran crisis as an important moment in so called citizen journalism or how mainstream media has evolved, or is there any sort of, you know, big picture here in your mind?

Lila King:  I think it's absolutely an enormous moment in citizen journalism. It's, it's one of the first times that we're actually seeing an entire story unfold through social media, through iReport, through YouTube, through Facebook, through means that we wouldn't have, you know, we wouldn't have been using five years ago because some of them didn't exist. I think the…I think the significant change here…the significant difference…sorry let me go back just a little bit.

In some ways, one of the things that we talked about a little bit when this story, sort of, started to, started to break, and we started to hear about it and uncover it in a very serious way, is it reminded us a lot of protests for democracy in the Myanmar, I guess, a couple of years ago now. And the way that that story unfolded, the photos and the videos, you know, you were starting to see them online and iReport and other places and think, "How can we really verify this information what's, you know, what's actually happening and how can we tell the story and I think one of the differences in Iran is that there is so much more material that we're actually able to, kind of, verify independently events and things that are happening by going to more than one iReporter and more than one person on the ground. If you were a journalist in the field right you would ask, you, you would corroborate details by getting a couple of sources, you know, by having a couple of people tell you the same thing.

In this story what's happened…on Wednesday last week it was really you know we were trying to figure out how, how the protests were going, what they, you know what they were like and the way we confirmed that was getting two separate iReporters who uploaded two separate videos of what turned out to be silent protests. They were incredibly dramatic videos; thousands of people marching in not saying anything. But the only way that we really could confirm that that was actually happening was going to two separate people and you know looking at two separate angles of the exact same event and talking to people who were in the same place at the same time and you know corraborate those details and ultimately let us report the story. I think, I think that's the difference, it's actually just the, it's the absolute volume of material and the ability to get in touch with people and find out what they're seeing.