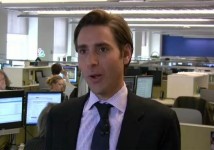 NEW YORK — Owen Thomas, who is finishing up as editor Valleywag, is heading to NBC to head up editorial operations for NBC Local in the Bay Area, one of several regional hubs created by NBC, it was announced today. (Press release below.)

News of Owen's new gig was first reported on TechCrunch by MG Siegler and reported in detail by Beet.TV

Earlier today, David and I went to 30 Rock to interview Owen's new boss Brian Buchwald.  Brian told us that Owen has "great sources, a voice and point of view."  We agree.

We will publishing a bigger story about NBC Local and a number of developments.  But, in the meantime, congrats, Owen.

More on the new job published earlier today on Mediabistro's WebNewser and a later report on the new Bay Area Newser.

Silicon
ValleyThomas, a 14-year veteran of
online media, will oversee the local digital content efforts in the Bay Area,
including the recently launched website for the region, nbcbayarea.com, as well
as mobile applications and syndicated offerings. No longer an
extension of the on-air newscasts, nbcbayarea.com features local
commentary, analysis, lifestyle coverage, news, and information created by local
contributors, blogs, online publications, print media,
and the television station to capture the pulse of and the Bay Area.

"Owen joins NBC Local Media
with a well-versed background in a variety of digital platforms. He has an
impressive track record of increasing web traffic and transforming digital
sites, and I am confident he is the right person to continue building on our
digital momentum," said Sullivan.

Thomas joins the NBC Local
Media Group from Gawker Media, where he served as
Managing Editor of Valleywag, the company's 24/7
online publication about technology and business, since 2007. During his tenure,
Thomas worked to reinvent and expand the site, quadrupling its monthly traffic
from 1.5 million pageviews to 6.5 million pageviews.

Prior to that, Thomas held
several positions of increasing responsibility at Time Inc. from 1999 through
2007, culminating with his position as Online Editor at Business 2.0. There, he
launched a network of 16 staff blogs and worked to
increase the site's monthly traffic from 2 million to 19 million pageviews.

Earlier, Thomas worked as an
online reporter and copy editor for Red Herring from May 1997 to June 1999,
where he covered startups, venture capital, and the technology industry.  He
also worked at Suck.com, Wired's groundbreaking online
publication, which has been cited by many as an inspiration for today's blogosphere. Thomas began his career in 1995 as an
Electronic Publishing Fellow at Mother Jones, the first general-interest
magazine to go online.

Thomas graduated from the University of Chicago with a degree in
East Asian Languages and Civilizations. He currently resides in San Francisco.