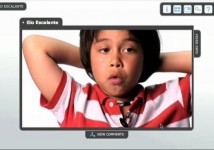 One of the most celebrated series has been OnBeing, a series of simple, three minute profiles of non-celebrities with interesting stories, simply shot.

“It’s about building an online community of people who don’t usually make the news but have fascinating stories to tell,” said Ju-Don Roberts, washingtonpost.com Managing Editor.

The series has just been launched with an unusual, interactive element, allowing viewers to post comments within a graphic interface.

Jennifer Crandall, Senior Video Producer at the Washington Post, is the creative force being OnBeing.  Yesterday we spoke with her via our Skype Video hook-up from the paper's multimedia newsroom.

The series has been nominated for an Emmy.  Maybe Jen will win it this time.  David, my low key video producer here at Beet, is really bowled over, thinking Pulitzer here

Prize or not, this is very innovative work and the Post continues to lead our industry.

Speaking of video reporting using Skype, Oprah is using it in a big way.

Schmidt speaks with the Washington Post's Steve Pearlstein about the management structure of Google.  This is the latest an interview series titled On Leadership. The video went up yesterday. You can read an interview with Schmidt on the FT.

I'm heading to the big All Things D conference in Carlsbad next week with Kara, Walt and the crew.  We will publishing all sorts of big stories later in the week.  So stay tuned, please.