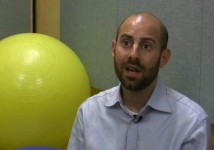 MOUNTAIN VIEW, CA — Google has been making progress with its Google Book Search project, having scanned and indexed 7 million volumes, but it will vastly expand if a settlement with authors and publishers is approved by a U.S. Federal court in Manhattan.

The settlement decision is expected sometime in Q4 of this year.  The agreement covers authors with who hold copyrights in the United States. If the settlement is approved, Google will expand the project globally.

We sat down with Google spokesperson Gabriel Stricker who explained the process and what the approval will mean for users of Google and authors of "orphan" books which are out of print but still have copyright protection.

While amount of money for authors in the settlement is just $60 per title, there will be other fees in the form of sharing in e-commerce, search and advertising.

Erick Schonfeld at TechCrunch wrote about the pending settlement and payment to authors back in February.

There have been some high profile objections to the settlement, including Brewster Kahle, Internet Archive founder,  who wrote an op-ed in yesterday's Washington Post titled "Book Grab."  His article is getting quite a lot attention including this piece on the WSJ.com

So just how does Google scan all those books?  The company declined to provide a demonstration to Beet.TV.  Stephen Shankland at CNET News.com wrote a post a couple weeks back which reveals the process as demonstrated in diagrams filed by Google for a patent.

8:00 PM ET Update:  The New York Times is reporting in a related story that Google has settled digital book rights issues with the University of Michigan, here's the report from CNET on the news

Gabriel Stricker:  At Google we have this program, this product called Book Search and we have scanned and indexed over seven million books because sometimes the answers people are looking for can be found inside of those pages. So the product exists today and it's very popular and people love it. There are some books that are in the public domain which you can read and access the entire book. They're out of copyright and so those books you can actually download a PDF copy for your own and do

what you want to do with it and print it out and read it and so on.

They're some books that are in print, obviously in copyright, and those books, so if you do a searche in Book Search for Freakonomics, you'd find that as an example right where you'll see just a portion of the book but what the publisher has instructed us to show. For the books that are in copyright but out of print, which is really the crux of the settlement agreement between us and the Authors Guild and AAP, for those books we only show a snippet view because again that's really what law allows under fair use.

And we came to an agreement with AAP and the Authors Guild to allow us, pending the approval of the court, to allow us to show more than just the snippet view, which we think will be really beneficial to users to allow them to access more and more of the book. And again, pending approval from the court, the idea is also to create a new revenue stream because if you're…if you have a case where you have abook that's out of print, that author has limited ability to make money off of that book. And the idea behind this, pending approval is to create a new source of revenue where we would actually be able to sell access to those books that are out of print, but yet in copyright. And so that's kind of what's to come. The reality is that we have a legal process that we have to abide by right now and so it's the part of the agreement that will be enabled once it's approved by the courts is not yet visible for users, but we're hoping that that will continue to progress on and that is the ultimate promise of it. And actually the ultimate promise of Book Search is to make all the world's books, not just the ones we've scanned, but as the program continues on and continues on that someday all the world's books be accessible to users.