Microsoft Exploring the “Cloud”…and so is the Tech Media 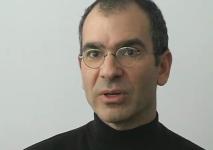 Cloud computing is certainly one of the big buzz words in the technology space — but what does it mean and where does Microsoft fit into this movement?  Last week in New York at the Microsoft offices, I interviewed Dan'l Lewin, Corporate Vice President for Strategy and Emerging Business Development at Microsoft.

In this interview, he provides a cogent explanation of the concept of cloud computing and its implementation at Microsoft.  He says that 2009 is a year of exploration.

Dan'l is located in Microsoft's Mountain View campus.  That's where  TechCrunch's February 28 conference on cloud computing titled "Whose Cloud is it Anyway?" will take place.

Could Microsoft have "Cloud Envy?"

Here's another interview on the topic.  In September on the MIT campus, I spoke with Forrester Frank Gillette about the hype surrounding cloud computing.  He says some big tech companies are using the term "cloud" computing to be fashionable, he calls the syndrome "cloud envy."

The U.S. Government Should Look to the Clouds

Over at CNET, Declan McCullagh posts an essay by David Kralik over the need for the Federal government to embrace the cloud.

Should Consumers Want the Cloud?

Here's the take by Lance Ulanoff at PC Magazine.