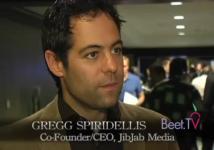 Verizon plans to expand its FiOS and broadband service, which began the first year of its local franchise agreement with New York City in July, to over three million residential units in the city over the next five or six years, Executive Director of Network Operations Chris Levendos says in this interview. Andy was among the first New York city recipients of Fios, and he blogged about it in a previous post.

Obama plans to appoint a cabinet-level CTO to oversee the broadband buildout of the nation, and I ask Chris in the segment if this will impact Verizon.

"We’re certainly interested in anything that’s going to continue to spur development of broadband. I think the best answer to that for Verizon and for the country is Verizon already has a major broadband plan that we’ve been executing on," he says. "It’s a robust plan, it’s what we believe to be a future-proofed plan for technology."

The fastest downstream speed FiOS currently offers is 50 Mbps, and even faster speeds will become available in the future. The U.S. is lagging behind other countries in truly high-speed broadband, which we discussed in our post about Akamai’s "State of the Internet" report; we hope Fios can help change that. So far FiOS Internet has 2.2 million customers nationwide, and FiOS TV has 1.6 million. Verizon declined to share the number of installs in New York so far, but FiOS is nearly 100 percent built out on Staten Island and captured 10 percent of the market there in the first three months of sales, Beet.TV has learned.