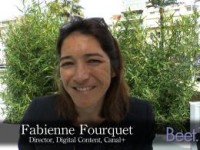 CANNES – The greatest value in second-screen interactivity and TV Everywhere services lies in customer retention says Fabienne Fourquet, Director of Digital Content at Canal + in an interview with Beet.TV at MIPTV 2013. The French premium TV service offers second-screen services for its soccer games, for instance, and regularly draws more than 100,000 users each weekend, she tells us.

“Second screen is important to engage users with experiences only we can provide so we are trying to provide extra content,” Fourquet says in this video interview. For its soccer coverage, for instance, the pay-TV service offers a range of camera angles via its second-screen app. Viewers can choose which ones to watch and can interact via social media as well. That app has been downloaded more than 500,000 times in less than a year, and more than 100,000 viewers use it every weekend for an average viewing time of more than 60 minutes. “The longer they watch, the more satisfied they are with a subscription,” she says.

Canal Plus also offers HBO GO-esque services with live feeds on tablets, mobile devices and online as part of its subscription. “Anyone subscribing can have access on two devices at a time,” she explains.

For more insight into digital services from a leading programmer, check out this video interview.