Half of Agency Buyers Allocate Money for Native Ads in 2013, Solve Media Says 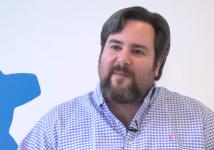 Native advertising is slated to grow significantly this year, with nearly 50% of agency buyers saying they’ll allocate money to the customized online ad formats, says Ari Jacoby, Co-Founder and CEO of Solve Media, in this interview with Beet.TV.

That’s the finding of a study Solve Media conducted late last year. We caught up with him for a deep dive into this study, as well as the “captcha” style formats that Solve Media specializes in.

Two of five media buyers said they’ve earmarked more than 10% of their 2013 budget to native ads, Solve Media reports in the online survey of 800 media buyers, agency creative, online publishers, venture capitalists and others. Solve Media’s ad formats fall in the native ad category because Solve Media specializes in serving captcha-style ads in a variety of text and video formats. In many cases, consumers enter a brand marketing message in the captcha. “Brands especially on the video pre-roll side think of the ability to type in [a marketing message] to skip an ad an act of brand kindness,” Jacoby tells us.

Jacoby tells us that these “type-in” ads save customers about seven seconds per transaction and often appear when an Internet user must register for a site, comment or submit a contest entry.

“These opportunities present themselves on 3.5 million sites globally and more than 330 million times each day,” Jacoby says in this video interview. He adds that nearly 60% of agency buyers said in the survey that native ads would be “very important” or “extremely” important in 2013. What’s more, he expects more publishers to rely on this format — about 20% said they’d add a native ad option to their rate cards, he says.

Solve Media launched in 2010 and has doubled revenue in the last year, while growing the number of publishers four times to nearly 6000, he says.

By Daisy Whitney on January 2, 2013 @daisywhitney