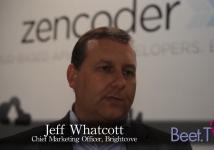 At IBC, Brightcove introduced enhanced tools for encoding, including a new workflow around live video publishing that enables live video streaming in the cloud rather than with hardware as well as faster transcoding and playback. Whatcott shares details with Beet.TV on the range of encoding options that Brightcove customers can use.

"You can encode video quickly and then take that video and put it into a Brightcove Video Cloud account," he says in this video interview with Beet.TV. "Over time, we will replace the encoding technology built into Video Cloud with Zencoder because it's faster and has better features."

By Daisy Whitney on September 7, 2012 @daisywhitney