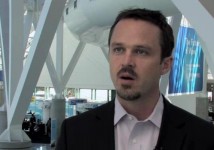 LOS ANGELES — While much of the industry's attention was on yesterday's announcement of Google TV, a small Georgia based company has been making considerable progress in bringing IPTV to the living room by integrating its service with existing cable gear.

One year after launching its Web-to-TV technology, Clearleap is now delivering content and services to more than 10 million video subscribers via deals with half of the top ten cable and TV operators in the United States, the company's CEO Braxton Jarratt told us during an interview at the recent Cable Show.

Clearleap's technology has been deployed in more than 40 markets and is being used to deliver a combination of Internet video, local programming and studio content to cable and IPTV providers, Jarratt said. The company recently released a new program guide application for its service.

Jarratt also talked about the growth of the over-the-top market and the buzz from connected TVs and Netflix. The success of Netflix's streaming is starting to impact the bottom line at service providers, he said.