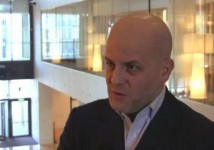 LONDON — LIvestation, the small London-based start-up that organizes real-time feeds of 20 of the world's leading video news sources, had 5 million video views with 65 million minutes of video watched in January, according to founder and CEO Matteo Berlucci.

I caught up with Berlucci at our London event earlier this month.  He explained how his business works with several of the world's leading news services through both subscription and revenue share.

Last month, the company announced an iPhone app.  It will soon release apps for Blackberry and Droid devices.

The site serves up many news sources, however, several including Bloomberg, CNBC and CNN are geo-blocked in the United States.