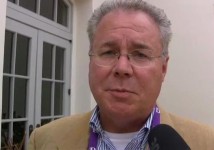 CARLSBAD, Calif –  Wireless giant Verizon is preparing its network to launch 4G technology in 20 to 30 markets in 2010, the company’s spokesman John Johnson told Beet.TV at the D: All Things Digital conference.

4G is the next-generation of wireless technology that should support better multimedia and video streaming on cell phones. Verizon’s goal is to generate more usage of broadcast TV and personalized video with the 4G rollout, Johnson told us.

The carrier began development of the 4G network back in 2007.

Verizon has been building up mobile video usage with its VCast service, which delivers video clips from TV networks and others on an on-demand basis and via streaming. “What people want to get is stuff that’s current, hot, topical — the game you can’t be in front of, the presidential speech, the breaking news,” Johnson said.

Verizon’s 4G push comes as mobile video is poised to take off. The iPhone has driven demand for video on cell phones. More than a third of iPhone users watch video on their phones, 10 times the average mobile user.

In addition, Cisco has forecast that mobile traffic will grow 66 times by 2013 due largely to video use.

Verizon had disclosed it's 4G plans earlier this year at the GSMA World Congress in Barcelona.

Meanwhile, the Wall Street Journal's Amol Sharma reports that Verizon is reading the ability to use Twitter on its FIOS high speed, fiber optic Internet service.

By Daisy Whitney on May 29, 2009 @daisywhitney
Tweets by Beet_TV