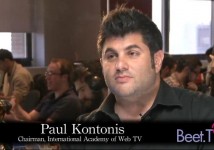 The International Academy of Web Television (IAWTV) will present its first awards program for excellence across multiple platforms on Thursday, January 12 in a two-hour awards program live from Venetian and streamed live on YouTube.

Last month, the day the nominations were announed, we spoke with Paul Kontonis, chairman of the IAWTV and a VP at Digitas.   He said that the membership of the IAWTV creates videos which have in excess of 150 million monthly views.

Beet.TV is a media sponsor of the IAWTV Award and will be on the scene at the Venetian.