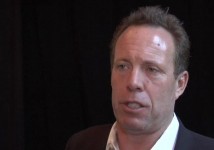 While advertisers and ad networks are driving online video ad rates "to the floor," the lower prices are making the media more efficient, providing a return on investment of 3 to 5X for digital video versus 2X  for television, says SVP Jordan Bitterman, who heads the media and social practice for Digitas, a Publicis unit.

Bitterman said the comparative numbers were based on results for unnamed Digitas clients.

In this segment from last week's Beet.TV Online Video Leadership webcast, co-moderator David Kaplan of paidContent asks AOL Video SVP Ran Harnevo about the pricing of the online video inventory.  Harnevo says that rates "are being driven to floor."

Following Harnevo is Bitterman's explanation on the upside of the downward trend of video ad rates.

Disclaimer:  AOL Video sponsored the Webcast which originated in its New York studios.