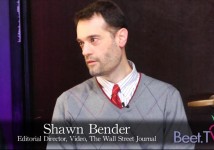 In addition to connecting with a valued audience with live programming, the process of creating daily Webcasts is valuable to the news organization, explains Kevin Delaney, Managing Editor of the WSJ.com.

Delaney was a panelist in session about online video journalism which I moderated earlier this month at Streaming Media East in New York.

In this segment, he explains how live programming is an efficient means to create both live and on-demand programming.

Also in this segment is Ann Derry, editorial director for video at The New York Times, who explains how programming Times Cast, as a for "live-to-tape" show is efficent.  The Times does limited live programming around major events, but hopes to do more, she says in this segment.

Editor's Note:  Many thanks to the team at Streaming Media East for providing the file of this session.  AP