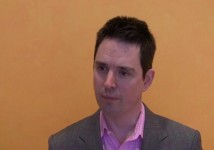 With the imminent role for Arianna Huffington as editorial chief of AOL, she will be "smart enough" to leave TechCrunch and its editor Michael Arrington alone, says Felix Salmon, finance blogger for Reuters and media pundit.

We spoke with him this morning at the paidContent2011 conference in Manhattan. Salmon interviewed Gawker Media chief Nick Denton at the media event.

Salmon also addresses the so-called "content farm" development, meaning mass-produced, highly searchable content. He calls it a "flash in the pan" which will decline.