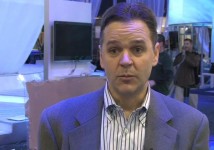 LAS VEGAS – While much has been said about the aging population for network news, the distribution of news via mobile devices is reaching a younger audience, says Charles Tillinghast, President of the MSNBC Digital Network, in this interview with Beet.TV

We caught up with him Wednesday for this overview on online and mobile video news distribution.

While he is enthusiastic about Apps and the emergence of tablet devices, he says that HTML5 video is the most widely utilized platform for video.

This is the first of several interviews from CES.

Very happy to welcome back to the show Doug Ray, who holds the title Chief Product Officer, dentsu Americas & Global Media We’ve covered Doug for a number of years and he’s always innovating, seeing what’s next and leading the industry. In his role he is deeply involved with the changing the media landscape. One […]