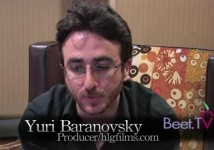 LOS ANGELES –  7-Eleven, the world's largest store chain, is quickly making a name for itself as a marketer that's open to digital experimentation.

On the heels of its popular Farmville integration, the food purveyor paired up with Blip and with digital producers Happy Little Guillotine Films on the $1 million branded Web series 7-11 Road Trip Rally and the show generated nearly 2 million views over three weeks, the show's producer Yuri Baranovsky told us at NATPE LA TV Fest.

The show was distributed across platforms including blip.tv, iTunes, Roku, Yahoo and Sony Bravias. Baranovsky talked to us about how the deal came together and also about international expansion opportunities he's seeing in Singapore and Italy.