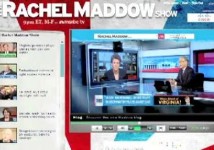 NEW YORK — Cisco Systems, which has a big* video teleconference business with a product called TelePresence, is entering the broadcast world with the MSNBC's Rachel Maddow, who is using the system to conduct remote interviews.

Unlike most conventional remote interview set-ups where a guest listens to questions in a an earphone, the TelePresence system displays both participants on large screens without latency between speakers, creating a virtual face-to-face conversation in 1080p hi-def resolution.

The "conversations" can be recorded and saved locally or streamed live.

The Rachel Maddow Show is the first program use the Cisco system.  It is also the only MSNBC program to be sponsored by Cisco.  Cisco display ads and pre-rolls dominate the show's site.  We assume that the use of the conference device is part of the sponsorship arrangement.

The Maddow show, which integrated the Cisco system on March 10,  is the first of several media implementations to be announced soon, we are told.

TelePresence is mostly used by large companies and governments who can afford the high price tag.  However, Cisco has begun to introduce smaller set-ups and will vastly expand its offering when it completes its acquisition of Tandberg, which is expected in Q2.

On Tuesday, in the Beet.TV studios, we interviewed Charles Stucki, VP & GM of the Cisco's TelePresence unit.

More Cisco updates to come from our chat with him and from Daisy's visit to the company's headquarters in San Jose on Tuesday.

Editor's Note:  In our segment we have a brief interview segment from the Maddow show. The voice of of Howard Fineman seems out of synch — this is a result of our video capturing software, not the broadcast.

*An earlier version of our post stated that TelePresence is a $3 billion business for Cisco, that is incorrect, that is an estimate for the overall teleconference business.