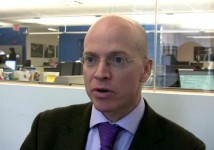 Running a news organization in heavily censored countries including China and Iran is not easy, nor is it always easy working with U.S. and British authorities, says Sean McGuire, Reuters top global news and politics editor in this interview with Beet.TV.

Earlier today, Sean and his colleagues were pleased that a freelance Reuters videographer was released by the U.S. military in Iraq.

"I am very pleased his long incarceration without charge is finally over," Reuters editor-in-chief David Schlesinger told Reuters today.

"I wish the process to release a man who had no specific accusations against him had been swifter."