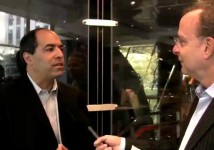 The company is heavily promoting the ePub format which will be used in the Nook and the Sony eReader. It is not used in the Kindle and will not likely be used in the anticipated Apple Tablet.

MediaMemo's Peter Kafka reports on the looming software battles over formats for the new devices.

Word is out today that the Nook has been sold out for Christmas.